Welcome to Tanah Abang Online, prepared by the Museum Kesejarahan Jakarta in cooperation with the Indonesian Heritage Society and published online by the East Indies Genealogical Society IGV.

Quick guide: How to locate a person

1) Using the Tanah Abang Index. Search for a name in the Index page here. Next to the name is a Document link which sends you to a searchable pdf to quicky locate the tomb-stone.

2) Browsing/searching through the different locations of the museum area.

3) Browsing/searching through All Locations (warning: this is a large file!)

This work follows pioneering work from Rob Dumas, who has earlier photographed and transcribed Tanah Abang tomb-stones (here and here), and added references to genealogical information. In the coming time we will work to merge these two resources. 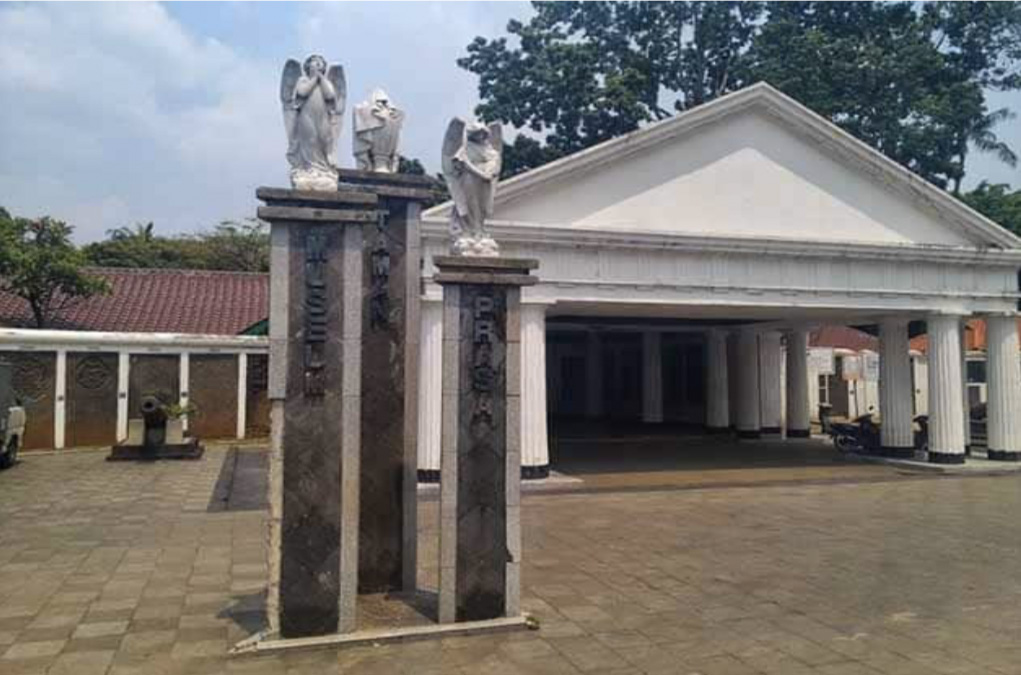 By Arnoud Haag, volunteer of the Indonesian Heritage Society, Jakarta and member of the East Indies Genealogical Society, IGV.

Museum Taman Prasasti, Tanah Abang, Jakarta
In the 17th and 18th century most Europeans who died in Batavia were buried in or around the churches of the town. By the late 18th century this was considered unhealthy and in 1798 a new cemetery was opened in Tanah Abang, south of the town. A number of large tomb-stones were moved from their former location to the new cemetery and were used to cover new tombs. The cemetery was closed in the 1960s and a large part of the area was cleared for urban development with most of the mortal remains moved to elsewhere. About 1300 tomb-stones were re-arranged on the remaining about 1 hectare of the former cemetery and in 1977 this part was opened to the public as an open-air museum of tomb-stones, called Museum Taman Prasasti.

The present inventory of the tomb-stones
At present slightly over 1000 stones are on display. In the course of 2019 Dutch-speaking volunteers of the Indonesian Heritage Society assisted the museum with preparing an inventory of the tomb-stones including transcription of the mostly Dutch texts on the stones and their translation to Bahasa Indonesia. The museum renumbered and photographed the stones, and for each stone a standard form has been filled out. All forms are included in the current documentation.

Location of the Stones
The museum area is divided in 10 blocks, labeled A to J, separated by foot paths; see the plan below. Other stones are fixed vertically in the east and west walls of the museum complex. For ease of finding a particular stone on site, the inventory forms are arranged by block and follow within each block as much as possible a clockwise sequence starting from the southeast corner: south, west, north, east. In Block C and F this sequence is not yet fully implemented because the stones are currently being re-arranged by the museum.

Note on Transcriptions
For ease of reading we have not followed the usual practice of adding “/” signs in the transcriptions to indicate line breaks in the original texts. For the same reason we have not followed the use of uppercase and lowercase letters as on the stones, but used uppercase letters for the names of the buried person(s) and lowercase for the remainder of the text.

Tomb-stones in situ
Thirty-three tomb-stones of the grave yard have been preserved in situ, the names and locations of which can be found here.

Comments
The transcriptions have been carefully checked but nevertheless may contain errors. The same applies to the Indonesian translations. We would much appreciate if readers would inform us of any errors they detect, while suggestions for improvement of the inventory are also welcome. Please send any correspondence to the museum and/or to undersigned.

Change log
In this document, we keep track of the changes in the index.

This work gives transcriptions of all the European grave stones on Java up to that date. Unfortunately, only the Volumes 1 to IV are available to us, the Volumes V to VIII announced in the preface of Volume IV may never have been published. We identified about a quarter of the stones of the museum in the Volumes I to IV and refer to this work as BvT. Prins, followed by the volume and page number. The identification of a few VOC stones given by BvT Prins is based on the work by K. C. Crucq of the Archaeological Service.

This typed document from the time the museum was opened lists 1190 stones and gives the names of the first person mentioned on each stone with date of birth and death, and some information on the stone itself.

This book lists 1323 stones of the museum, again with only the name of the first person mentioned on the stone, his/her dates of birth and death, and the dimensions of the stones. A list of 33 graves is added which are said to be in situ. Unfortunately, many Dutch names have been spelled incorrectly.

Internal documents of the Museum Taman Prasasti include inventory lists of the stones. The lists give only the names and dates of the first person mentioned on each stone while many Dutch names are spelled incorrectly.

On-line document with an addition from 2016. This well-illustrated document gives transcriptions of the texts from almost 200 grave-stones of Tanah Abang, mostly dating from the period 1920-1948.